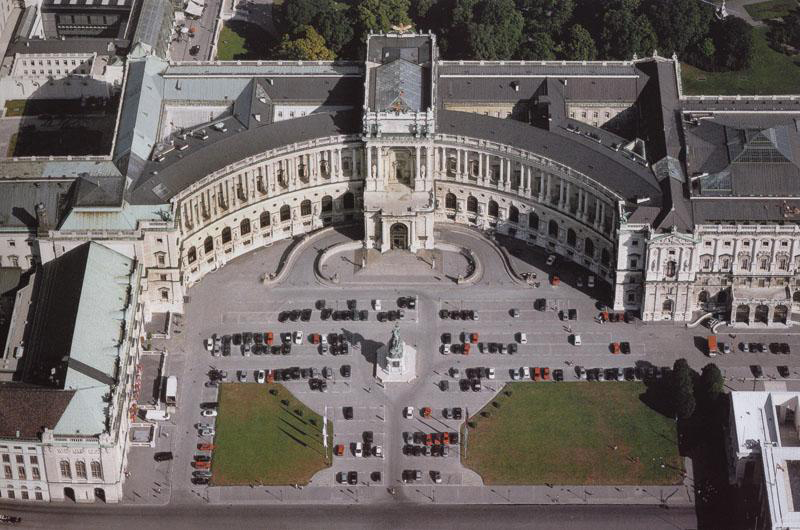 When Napoleon occupies Vienna in 1809 he has the old city wall in front of the Hofburg blown up. A few years later, this space becomes home to two gardens (Burggarten and Volksgarten) and a parade ground, today’s Heldenplatz.

Although this makes Heldenplatz the newest part of the Hofburg, it is hard to find another square in Vienna with as eventful a history.

In March, 1938 Vienna’s Heldenplatz and in particular the balcony of the Neue Burg gain sad notoriety by being the scene of Adolf Hitler’s announcing the annexation of Austria by the German Reich.

But Heldenplatz has more to show for itself than sinister memories; the Outer Burgtor as well as the entrance to the Weltmuseum, Ephesos Museum, Papyrus Museum, Hunting and Arms Chamber, Collection of Historic Musical Instruments and the Hofburg Congress Centre can be found here. Presided over by the imposing equestrian statues of Archduke Charles and Prince Eugen. Incidentally Heldenplatz (or Heroes’ Square) owes its name to the monuments of these two war heroes.

Enjoy now the 3 points of interest from Highlight 4 “Heldenplatz and Neue Burg” before continuing your walk on Vienna’s RIngstraße. To do so cross Burgring again and then follow the direction of traffic. Highlight 5 of our tour of Vienna’s Ringstraße is Palais Epstein. You will find it on Burgring right next to the Naturhistorisches Museum.