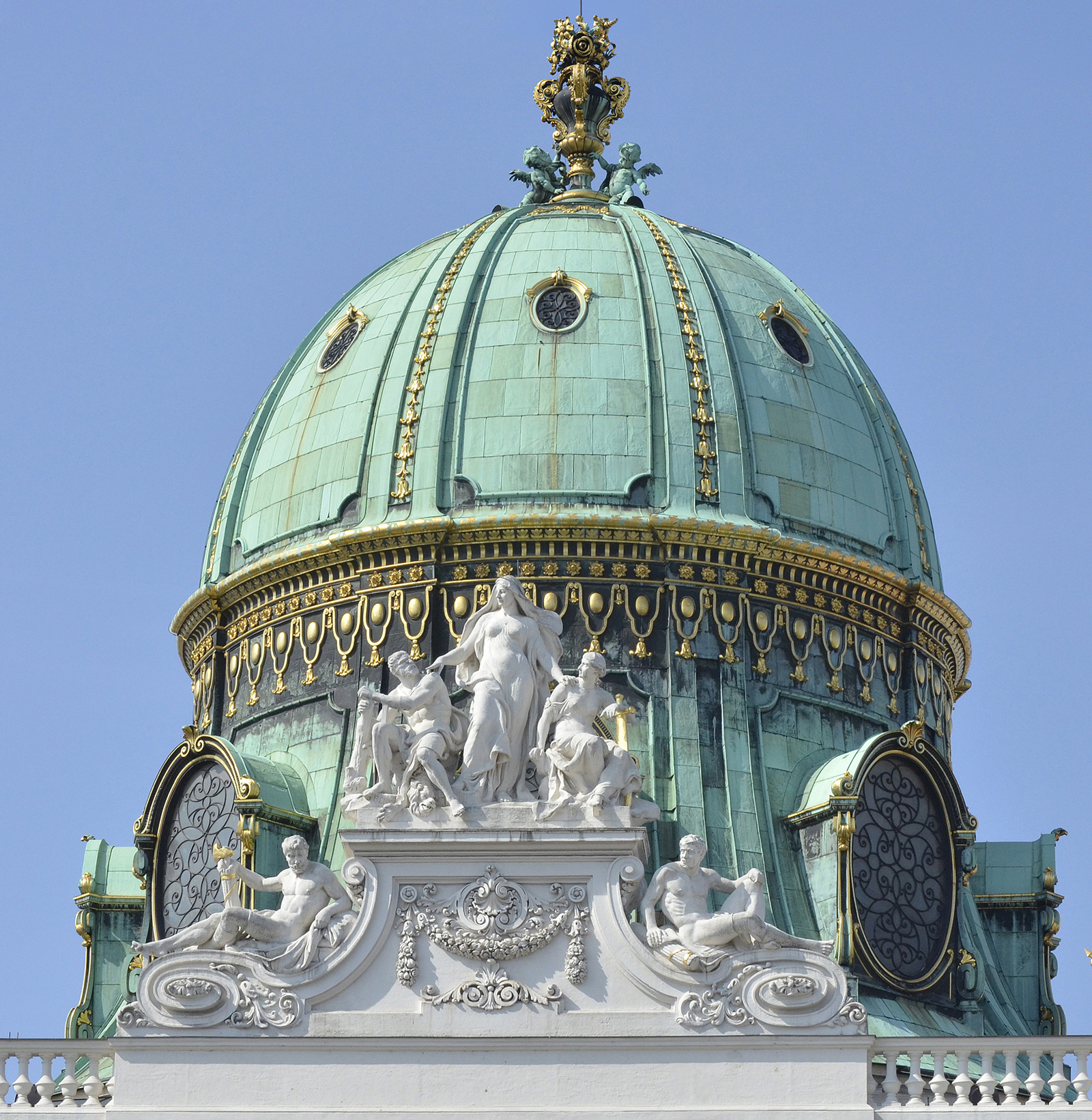 The dome of the St. Michael’s Wing

As early as 1730, plans for the structural completion of St. Michael’s Wing and its integration into the multi-faceted Vienna Hofburg complex are developed by the famous architect Joseph Emanuel Fischer von Erlach. The culmination of the project should be an impressive dome. But the old court theatre on Michaelerplatz stands in the way of these plans.

It is not until the end of the 19th century when the old court theatre is torn down, that the project can be realised under the direction of the castle captain Ferdinand Kirschner in the years between 1889 and 1893. The exterior height with the copper plate-covered dome of the St. Michaels Wing measures 54 m, the interior heigh 35 m. The oval skylights with grillwork, so-called oxeyes, see to it that the interior of the dome is lit by natural light. The 2 smaller side domes, which complete the top of the Michaelerplatz façade of the St. Michaels Wing, are similarly in their construction.

If you enter the St.Michael’s Wing via the pedestrian entrance, you will find in the niches on either side allegorical representations of the positive characteristics the Emperor and his people are associated with in the late 19th century. In the niche by the left-hand pedestrian entrance are 2 sculptures symbolising the “care of the Emperor” (“providenti augusti” in Latin) and the “hope of the fatherland” (“spes publica”). The sculptures in the niche by the right-hand access symbolise the “piety of the Emperor” (“pietas augusti”) and the “loyalty of the people” (“fides publica”).

2 more groups of figures on the walls next to the niches on either side of the pedestrian entrances are allegorical representations of the “ruler going into war” (“profectio augusti”) and his “victorious homecoming” (“adventus augusti”).

And there are 4 more groups of figures on the side of the access below the dome bordering on the inner castle courtyard. These sculptures epitomise the Latin mottos of the 4 regents involved in the history of the St. Michael’s Wing: “Constantia et fortitudine” (“with steadfastness and courage”) is the motto of Emperor Charles VI (1685-1740), “Iustitia et clementia” (“justice and clemency”) that of his daughter and heir Maria Theresa (1717-1780), “Virtue et exemplo” (“by virtue and example”) is attributed to Emperor Joseph II (1741-1790) and “Viribus unitis” (“with united strength”) to Emperor Franz Joseph I (1830-1916).