The theft of the Saliera 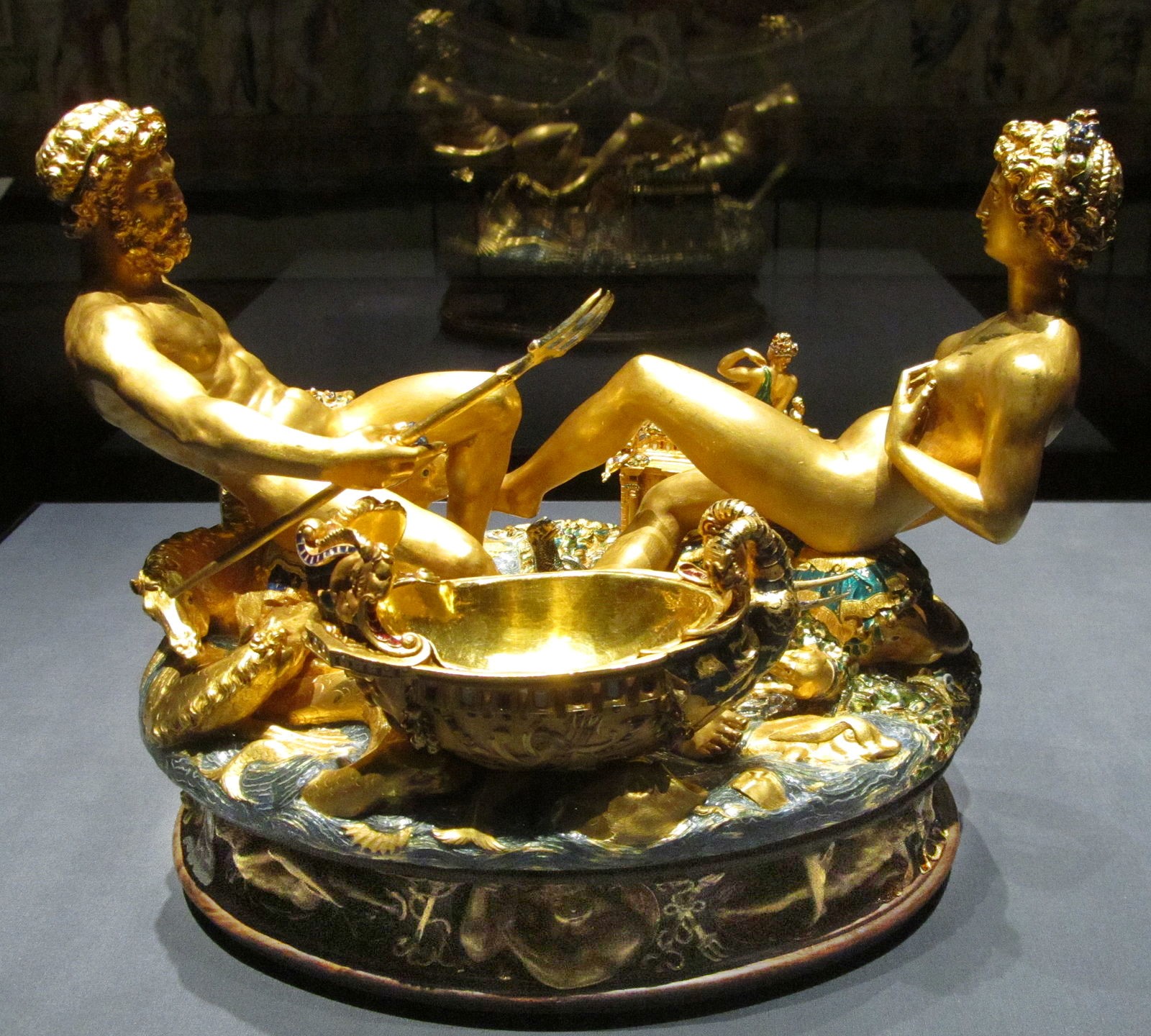 Cellini has already produced a trophy and basin for the Italian Cardinal Ippolito d’Este. The Saliera, the Italian word for salt cellar, was conceived to complement these. When the Cardinal lays eyes on the wax model, he withdraws the commission, believing it impossible to make.

In France, Cellini shows the model to King Francis I, who, as a result, commissions him to produce the Saliera in around 1540. It is the only remaining piece of gold work by Cellini and shows Neptune, the god of the sea, and Tellus, the Roman goddess of the earth. Neptune is surrounded by hippocampi, seahorse-like creatures with fishtails. To the right of Neptune, on the side he holds his trident, the salt vessel floats like a ship, accompanied by dolphins. On the other side is a pepper holder in the form of a triumphal arch, crowned by a nymph. Fruit and flowers sprout from the earth goddess’ hand. The Saliera is clearly dedicated to the French King. The earth goddess is seated on a cloth decorated with lilies on the head of the King’s favourite animal, the elephant, and between Neptune and Tellus, a salamander raises its head. This is the King’s heraldic animal and embodiment of the motto “I nourish and extinguish” (Lat.: “Nutrisco et extinguo”, Fr.: “Je m’en nourris et je l’éteins”) meaning, “I feed on good fire and put out the bad”.

Neptune and the ocean give us salt, while Tellus, symbolising earth, gives us pepper. Cellini writes in his pictorial programme, “The 2 have gracefully intertwined their legs, one stretched, the other bent; this position is supposed to represent the mountains and the level of the earth.” The base of the sculpture is divided into 8 niches with representations of the seasons and times of day - dawn, day, dusk and night - as well as symbols of human activities.

Cellini, who has a large workshop with employees from throughout Europe, produces the Saliera in beaten sheet gold and, as he writes in his description of the work “as beautiful and elegant as I knew how and was capable of”. Partly enamelled, the base consists of ebony and gold. The Saliera stands on 4 sunken, freely moving ivory balls, which allow the salt cellar to be rolled in any direction.