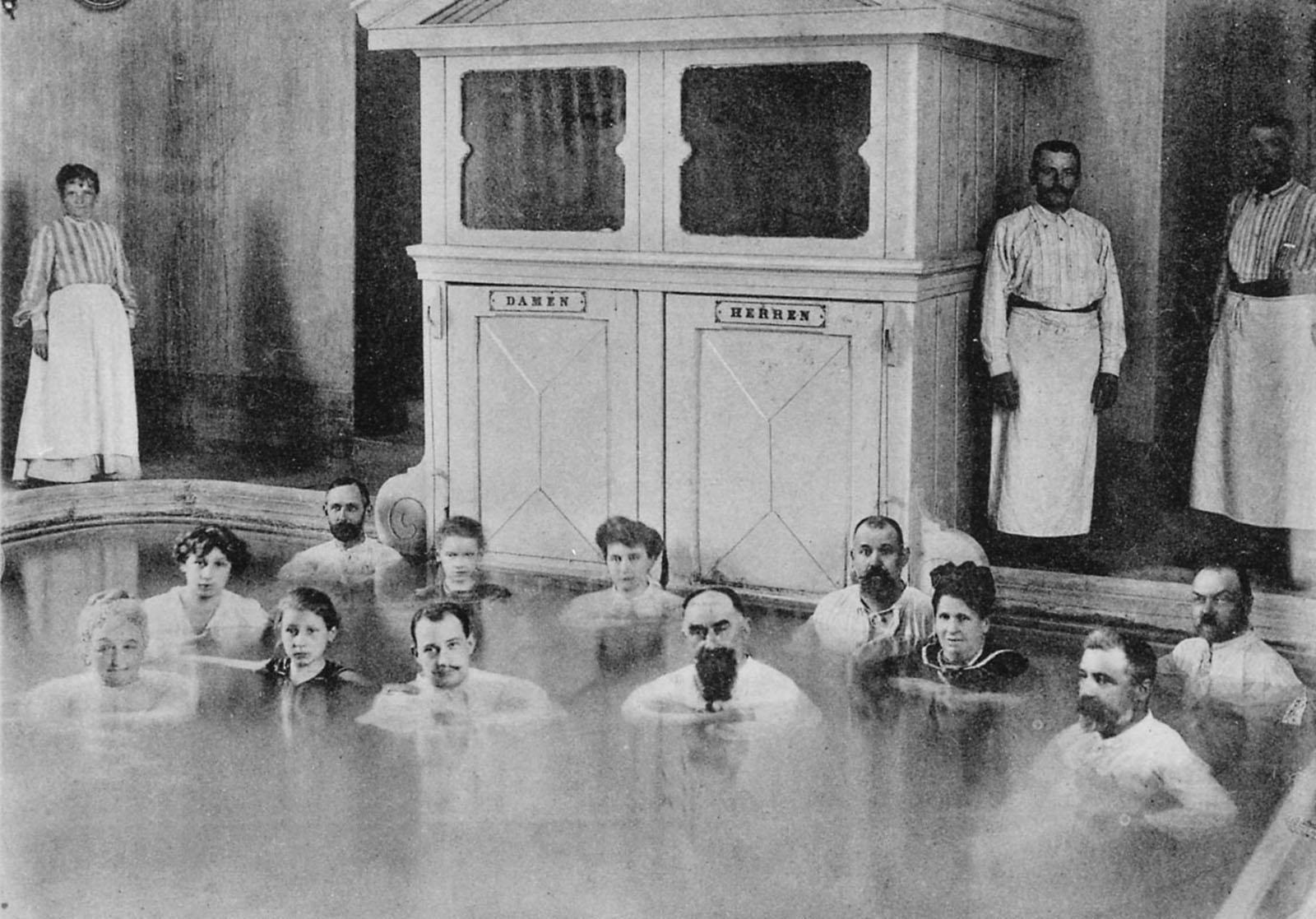 Nearly 2,000 years ago, the Romans already knew the town of Baden under the name “Aquae” and were aware of the healing properties of its sulphuric springs. They set up the first spa, the existence of which is proven by excavations at the end of the 18th century.

The original spring the Romans made use of is located in a grotto exactly below the orchestra pit of modern Baden’s Summer Arena. In the 13th century the high altar of the Frauenkirche (Church of Our Lady) is erected over a second spring. Next door, 2 bathing houses are built, the Frauenbad (Lady Baths) and the Neubad (New Baths). When the church is torn down in 1811, a 2m-thick ashlar wall and side walls are discovered, probably the remains of another Roman thermal spa.

The coat of arms in the picture above is bestowed upon Baden along with town privileges by Emperor Frederick III in 1480. Even back then it serves as an ad for Baden as baths and spa town.

When the spring below the Summer Arena comes into the possession of the municipality in 1716, moves are made to encourage Baden as a cure resort. But it takes nearly 80 years for Baden to become a fashionable spa town.

From 1796 Emperor Francis regularly spends his summers here, with nobles, the wealthy middle classes and artists in tow. Since the new clientele wish to be accommodated in the manner in which they are accustomed, numerous houses, villas and baths are created by the most renowned artists of the time.

Joseph Kornhäusl for instance, builder of Weilburg Castle, is responsible for the Sauerhof and Engelsbad (Angels Baths); at around the same time, on the site of the Gothic Frauenkirche which is destroyed in 1810 and the 2 adjacent baths, the Frauenbad and the Neubad, the French star architect Charles de Moreau reconstructs the bathing temple, the Frauenbad, in the Neoclassical style, which has been maintained until today.

When Emperor Francis dies in 1835, his son and heir Ferdinand I turns his back on Baden. Emperor Franz Joseph later spends his summer months in Bad Ischl. But Baden remains the most important summer holiday destination for the Habsburg-Lorraine family. The completion of the southern railway, making the journey from Vienna both easy and quick, gives Baden fresh impetus.

Day trippers from the imperial capital arrive en masse and additional, larger baths are created, for instance the mineral pools by Vienna State Opera architects August Sicard von Sicardsburg and Eduard van der Nüll in 1847. These baths form the historical part of Baden’s Römertherme (Roman Baths) today. In 1926 the thermal lido is added, which not only has a unique artificial beach but, at the time of its creation, the largest swimming pool in Europe.

The town of Baden has over 14 prepared – that is to say walled and sealed – sulphuric springs, which with the exception of the Engelsquelle (Angels spring) are under town management. Thanks to its hot springs Baden is now one of the most important tourist destinations in Lower Austria.