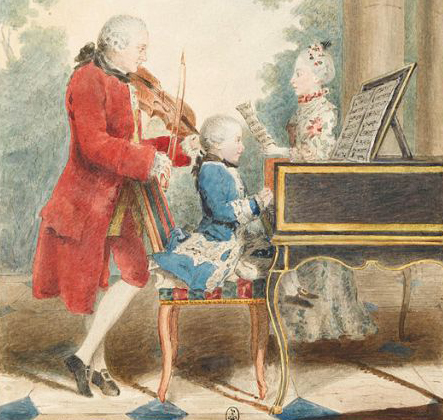 A masterpiece for the choirmaster

Several decades before Baden’s rise to international fame as a cure resort under Emperor Francis I begins, Wolfgang Amadeus Mozart also pays a visit to the town. This is due to the fact that between 1789 and 1791, his wife Constanze spends weeks on end on cure retreats and Mozart does not like having his wife out of sight for long periods.

But Mozart is also a man-about-town and finds a friend and drinking buddy in Anton Stoll, Choirmaster at Baden’s Parish Church of St. Stephen. The pair are often said to have not made it through the so-called “Lumpentürl” or “Partygoers’ door” until the early morning, when the city gates had been closed for hours.

But Anton Stoll not only provides amusement for Mozart, he clearly inspires him to write extraordinary music. In just one night Mozart composes perhaps the most beautiful motet in musical history, his “Ave Verum”, which he dedicates to his friend Stoll.

Evil tongues claim this is a thank you to Stoll for watching over Mozart’s wife in Baden and preventing her from taking up with strange men in his absence. A week later the work is performed for the first time in St. Stephen’s. Sitting at the organ is none other than Wolfgang Amadeus Mozart in person. The original notation of the “Ave Verum”, which was in Anton Stoll’s possession for a long time, can be found in the Austrian National Library today.