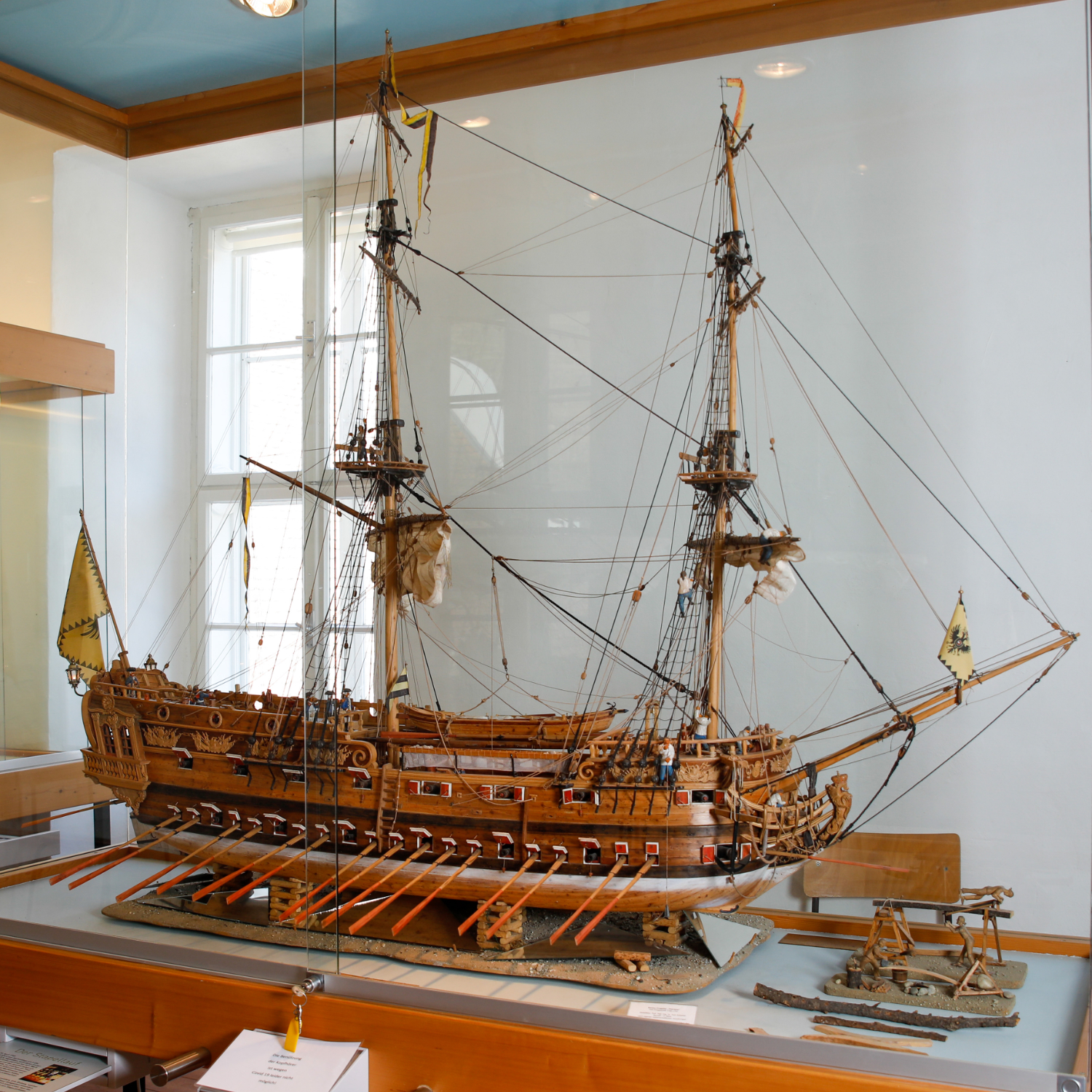 This room is dedicated to Kurt Schäfer.

Schäfer met Otto Meißinger at a ship model show in Vienna in the late 1950s. The two men found a long-term collaboration through their shared passion. The opening of the Spitz historical shipping Museum in 1970 at Meißinger's suggestion would have been unthinkable without Schäfer's fantastic ship models.

With meticulous accuracy and incredible craftsmanship, Kurt Schäfer created unique models of wooden ships based on original construction plans. He not only manufactured almost all parts of his models himself, but also designed special machines to be able to better manufacture individual components. Kurt Schäfer's models are absolutely true to detail and consistently on a scale of 1:20, making them absolutely unique in Europe.

You can see the masterpiece of Schäfer's long creative period as a model maker here in this room: the model of the Danube frigate "Theresia", named after the famous ruler of the Habsburg Empire, Maria Theresa.

The original of the "Theresia" shone mainly through megalomania and ineffectiveness. Built in the Klosterneuburg shipyard, the frigate, which had 38 cannons and 14 oars on each side, was suitable for the high seas, but completely oversized for use on the Danube.

When the "Theresia", at that time still nameless, was launched in 1768, the ship is said to have run aground immediately due to its enormous weight and depth. According to sources, it took several floods to get the frigate afloat again. The "Theresia" got its name twenty years later, when the emperor Joseph II had it used for the siege of Belgrade.

On the left on the wall, you can see a replica of the figurehead of "Theresia" in original size. It depicts a Chinese guardian lion with a crown on its head and a shield with five coats of arms in its paws, including those of the Archduchy of Austria, Hungary and Bohemia.

You can find interesting details about the history of the so-called Tschaiken and their crew in the book on the wall next to the figurehead.

Tschaiken were small galley-like boats equipped with sails and oars that had cannons and were primarily used to secure the Austro-Hungarian border region on the waterfront with the Ottoman Empire. It is not known whether the water equipment of the Tschaikists, the crew of the Tschaiken, shown on sketches in the book, was actually manufactured and used.

Kurt Schäfer took the frigate "Theresia" as a model to create his unique masterpiece. He spent twelve years building the ship, which, like all his models, is on a scale of 1:20. And as usual, Schäfer made all the parts that can be seen in and on the model by himself.

With one exception: if you look at the model from the rear, you will discover a stove in the back of the ship. Schäfer even modelled and fired the bricks for the stove himself but bought the poker on top from a model shop.

Of course, that doesn't detract from the ingenuity of Schäfer's model. In 2001 he travelled to London by car to take part in a large model building competition, a kind of unofficial world championship. To do this, the designer first had to partially dismantle his model, which he had been building for 12 years, and reassemble it on site.

The professional world was enthusiastic. Kurt Schäfer won the gold medal and the award for the best ship model before 1820.

To get to the last stop on our tour, you now have to leave the Erlahof with the museum and go to the open-air area opposite the entrance door.