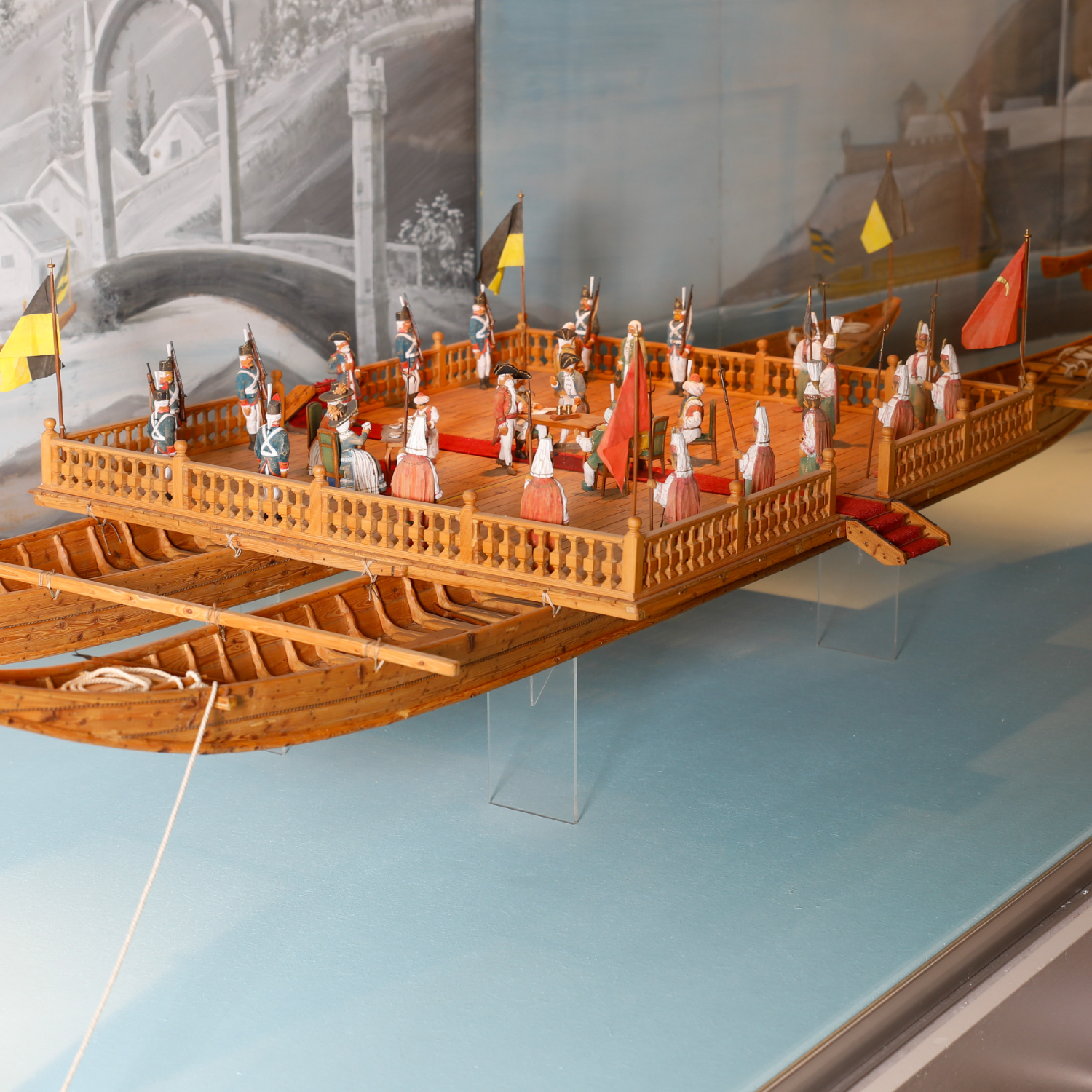 A ship as a negotiation platform

In addition to the prelate's hall, this room is another example of the sumptuous baroque furnishings of the rooms that the respective prelate had available during his visits to Spitz. It was the only room that had a tiled stove and could be heated.

In addition to the eagles in the corners of the room, the stucco portal with flower motifs in a delicate colour scheme deserves a special mention. The stucco work on the ceiling is carried out using a technique that is rarely used, so-called "perforation".

In this room there are some very special ship models, an exceptionally magnificent one can be found in the showcase on the left.

It is the ship of Emperor Charles VI. The model was made exactly according to the original plans from the National Library, even the carvings on the decorative elements are precisely elaborated.

Ships like this were used by the aristocrats themselves and were naturally much better equipped than the usual barges. They usually went in convoy and had various escort ships, including kitchen ships, warships and rope platforms.

The right showcase in front of the next portal deals with a special event from the history of the Habsburg monarchy. The scene shows the transfer of the embassy of Freiherr von Rathkeal from the sphere of influence of the Habsburgs to that of the Ottomans.

This was celebrated on a so-called "flying bridge", as the model shows. The “flying bridge” was anchored in the middle of the river, where representatives of both parties signed and handed over the documents. This form was supposedly chosen to speed up the negotiations, because staying on such a "flying bridge" was naturally not very comfortable.

What was special about it was that the Habsburgs and Ottomans were still in constant conflict with each other at that time. Nevertheless, they tried to be in diplomatic contact and therefore sent ambassadors.

The Habsburg ambassador was Peter Philipp Herbert Freiherr von Rathkeal, who was sent to Constantinople in 1779. The journey there could be done relatively comfortably and safely on the Danube up to the border at Semlin near Belgrade. After crossing the border, the Ottomans only allowed journeys on land for military reasons. But since the Habsburgs were very interested in mapping the Danube behind the border with the Ottoman Empire, Rathkeal resorted to a ruse.

He was traveling with his pregnant wife and was able to convince the Ottoman Sultan that the arduous journey overland was too dangerous for her. Therefore, as an ambassador, he received the unique permit to continue the journey from Semlin to Ruscuk on the Danube.

On his ship, which can be seen in the right part of the showcase, some cartographers and military pioneers camouflaged as sailors were on board. Under the command of the experienced pontoon captain Georg Lauterer, detailed plans of the lower course of the Danube could be drawn up as far as Ruscuk for the first time. These plans have been preserved in the Austrian National Library until today.