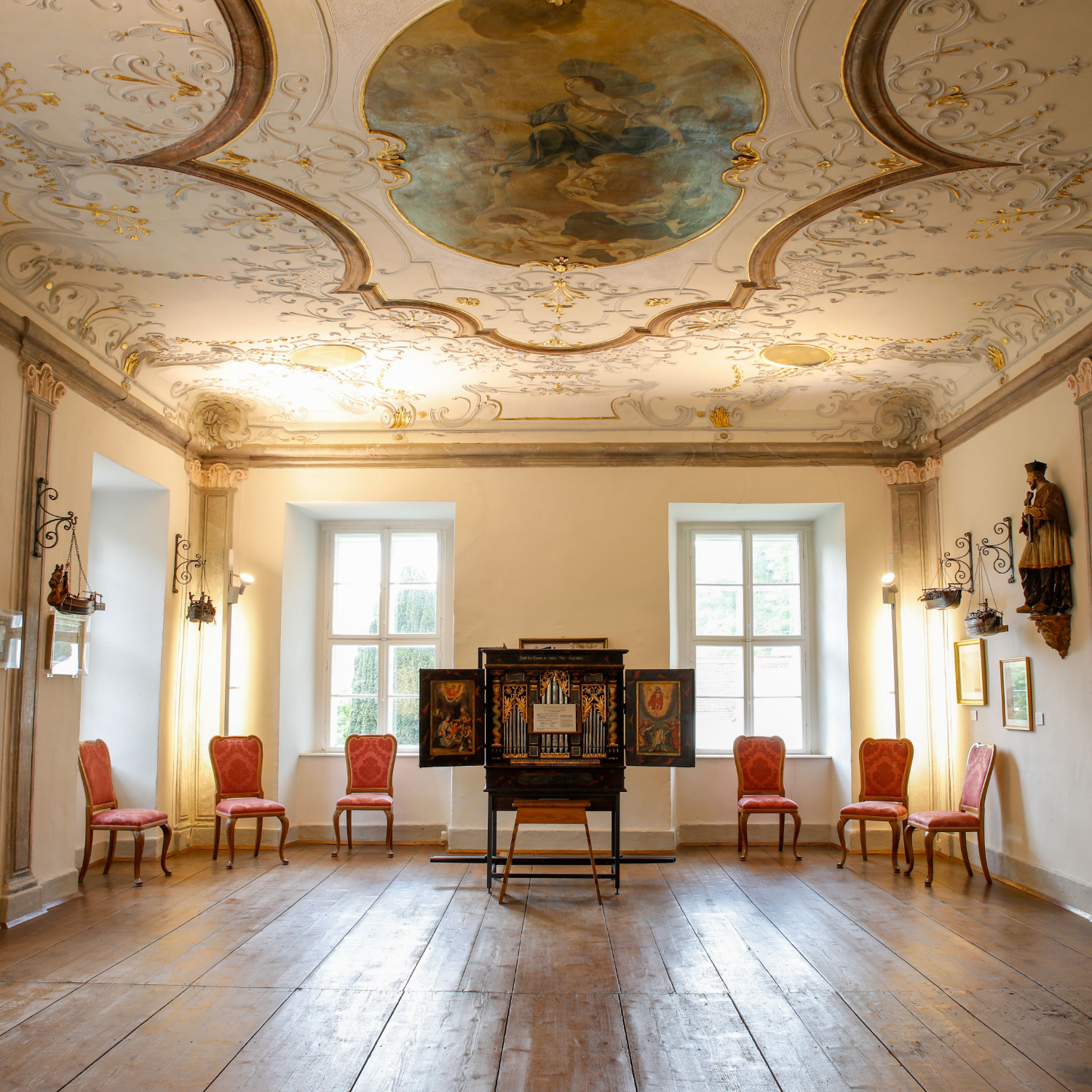 The lavishly furnished prelate’s hall is a three-axis room with a grooved flat ceiling, the cornice of which rests on Corinthian pilasters.

The ceiling painting depicts the Assumption of Mary into heaven, the stucco is partially gilded and, with the year 1731, allows conclusions to be drawn about the completion of the elaborate work. Motifs from the legend of Saint Benedict and his sister, the Holy Scholastica, can be seen in the corners.

The coats of arms of Niederalteich Abbey and Abbot Joscio Hamberger as well as those of Bavaria and Austria are attached to the magnificent portals. The so-called "lion portal" is also decorated with rich stucco, including lions as the heraldic animals of Bavaria and trophies as a reminder of the victorious end of the Turkish wars.

The model in the front left corner hung over the boatmen’s table in an inn in Spitz until the 1990s.

The poles on the sides are procession poles. A deserving member was allowed to carry the pole in front of the boatmen's community during religious processions such as harvest festivals or Corpus Christi.

For this or similar purposes, one of the showpieces of the Spitz historical shipping museum was built - the “Schifferorgel”, the “boatmen’s organ”, which you can admire here in the prelate's hall.

The instrument was built in 1697, it is portable and relatively high tuned in the range of approx. 220 Hz. The reason for the high pitch was a very simple one: higher pitch meant the use of organ pipes that produced higher notes. And they were simply smaller, lighter and cheaper than large pipes for low notes.

The boatmen's organ, like the processional poles, was used during religious processions in order to have adequate music for the masses during such an event. The “Schifferorgel” of the Spitz historical shipping museum can still be played and is used as a solo instrument from time to time at special concerts.

When you press one of the three buttons on the instrument you can experience the special sound of the boatmen’s organ right here. The tunes were played by Franz Haselböck, one of the grand masters of organ playing in Austria.

The next stop in the next room is dedicated to some special types of ships and their owners.