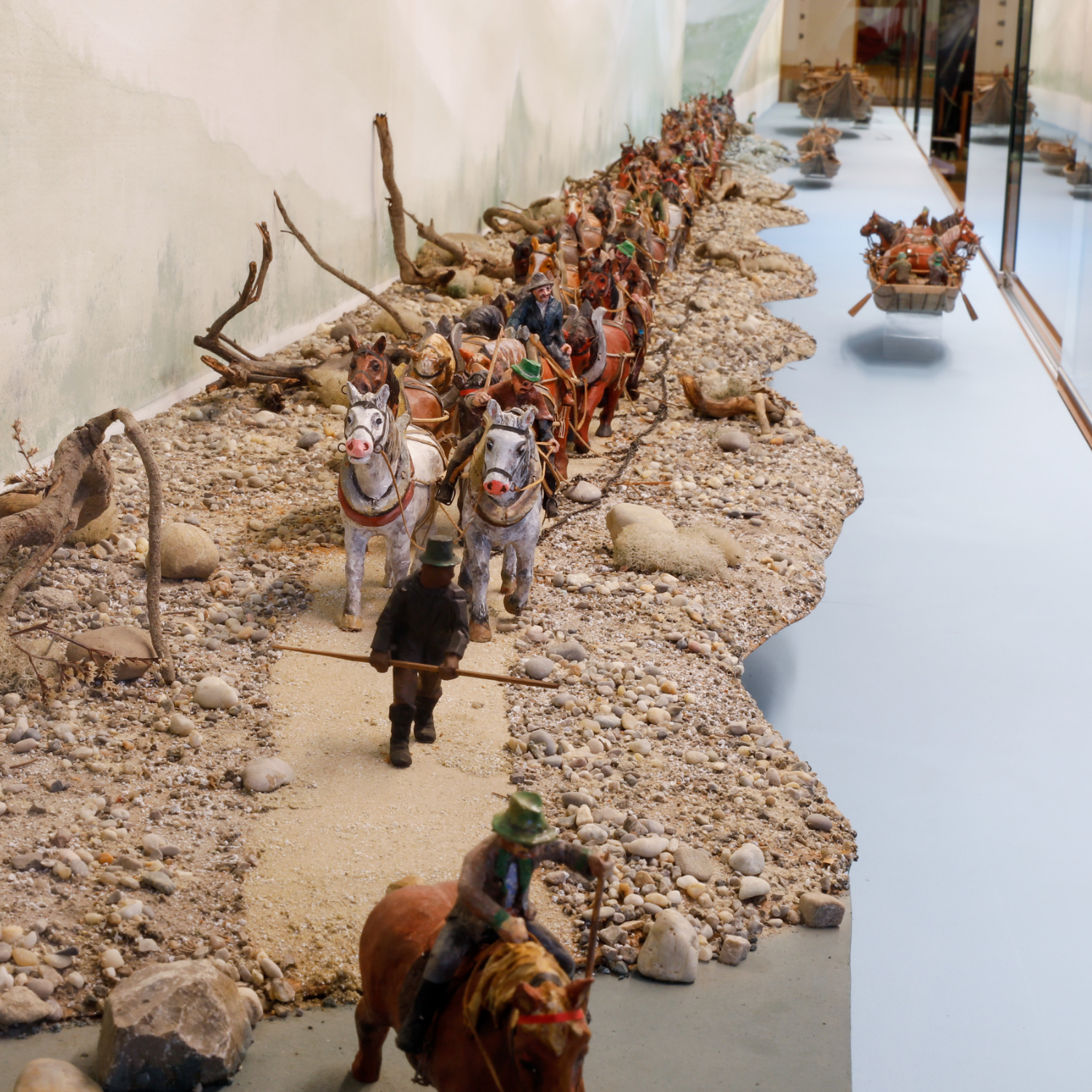 Before the introduction of steam shipping, the transport of goods on the Danube against the current was not only extremely difficult and time-consuming, it was also a sophisticated technical achievement. In order to arrive safely at the destination with the cargo, precise interaction of all players involved was required, from the first rider to the last barge driver,

The difficulty of the task can already be seen from the fact that the most important positions in the ship upstream had their own names: while the captain of a ship traveling downstream was called "Nauführer", he was called "Sössstaller" when traveling upstream, named after his sleeping place, the "Söss", at the deepest point of the ship, where a possible water ingress was first visible.

In the showcase on the right side of the room, such a transport upstream is shown in the model.

The longest ship transports were pulled by 60 horses. The first rider, the so-called “Waghals” or “daredevil”, played a special role. The name was not by chance: the “daredevil” had the dangerous task of exploring the path in the river in front of the ships with his horse and, for example, checking whether the mouth of a river or stream was passable. In the German language the term “waghalsig” still stands for a very courageous and ambitious person.

This task was life-threatening as the structure of an unregulated river could change continuously. A place that was easily passable during a ship transport could have been washed out the next time by a storm or flood and have become a deadly trap.

A maximum of three large ships were connected by ropes. The main rope ran over three so-called "Furkelzillen" to the main boats, named after the Y-shaped wooden construction at the head of the boats, the so-called "Furkel".

The job of the “Furkelzillen” was to keep the main rope in the right position away from the bank. The complex cable routing between the ships is described in more detail on the small pull-out boards under the showcase.

The foremost ship in the model is the "Hohenau" of the "Kelheimer" type, the second ship was referred to as "Nebenbei" and the last ship was the so-called "Schwemmer", both of the "Gams" type.

Some smaller barges were also carried as liaison vehicles or special transport barges. For example, the “Seilzillen” or “rope barges”, which were used exclusively to transport the important and extremely valuable ropes.

A complete ship transport upstream could be up to 800m long and cover up to 20 kilometres per day against the current under the best conditions, but often only 10 to 15 kilometres were possible.

Of course, only high-quality goods were worth the immense effort. The most expensive, documented load of a ship formation upstream was Ottoman silk - at that time an unparalleled luxury item!

The transports moved along the so-called "Treppelwege", small paths alongside the Danube, the name of which was derived from the noise made by the horseshoes, because such a shipping formation upstream could often be heard long before you could see it.

And that was a good thing, because once the almost one-kilometre-long ship transport upstream was in motion, it only stopped in an extreme emergency. So it was better not to stand in the way.

Today the towpaths along the Danube are used as popular cycling and hiking trails and their name reminds us of the long-gone times of dangerous ship transports upstream.