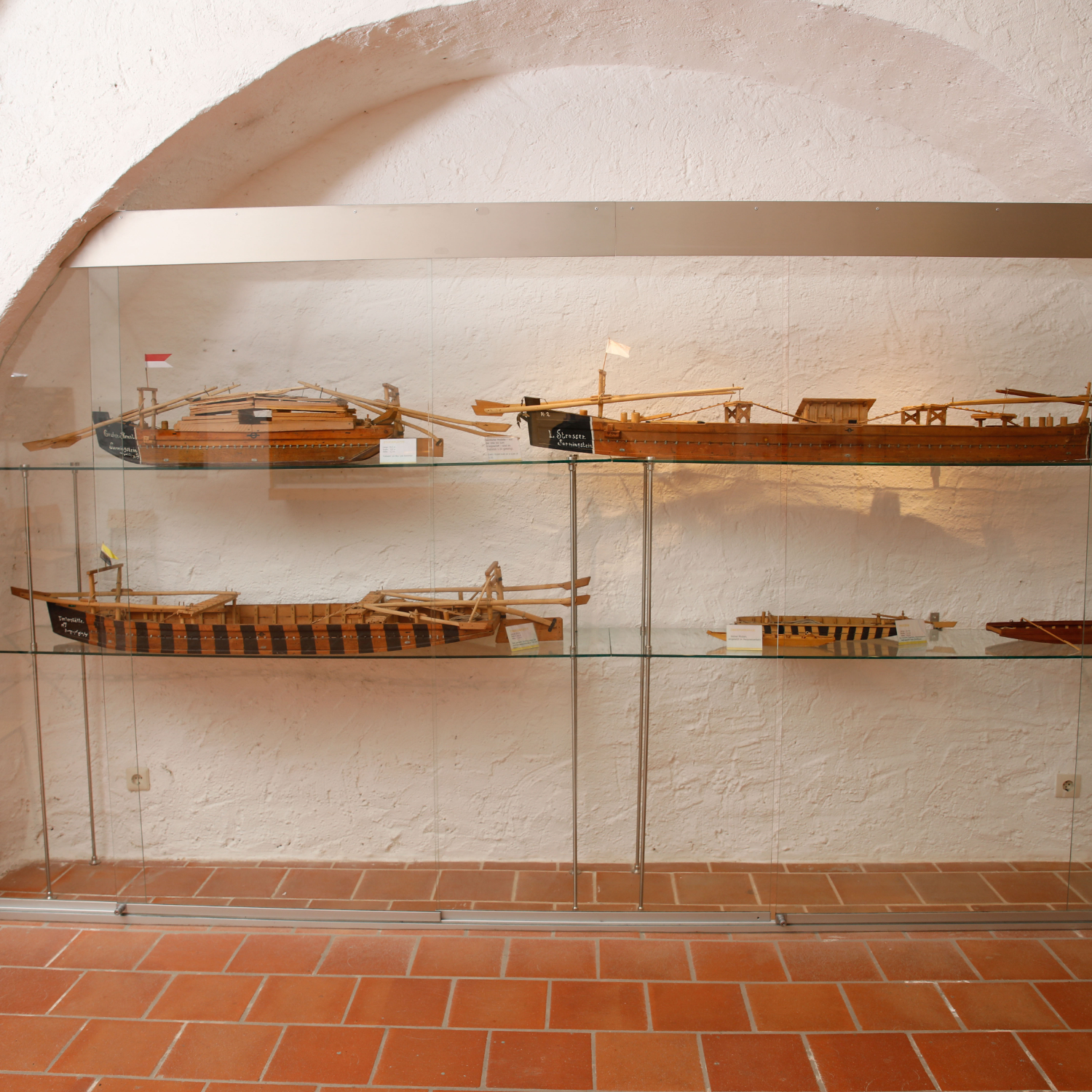 You already got to know the term “Zille” in the previous room. The so-called “Zillen” or “Kaffenkähne” were built in various sizes and designs for their respective purposes on the Danube.

A model of the largest of these ship types can be seen in the showcase on the left side of the room. The so-called “Kelheimer” could be up to 40 meters long and 15 meters wide and could transport up to 300 tons of cargo on the “Naufahrt”, as the journey downstream was called. As with many “Zillen” types, the name "Kelheimer" comes from the place where this type of boat was primarily built for the first time. In this case the village of Kelheim in Bavaria.

How big and in which design “Zillen” were built always depended on the intended use. In this case, huge stone slabs from nearby quarries, the so-called "Kelheimer or Solhofner Platten", were transported downstream on the Danube from Kelheim. Hardly any larger buildings along the Danube could do without these panels; you can find them on and in Vienna's St. Stephen's Cathedral.

Incidentally, Kelheim in Bavaria is the place from which the Danube becomes navigable downstream for the first time and that has not changed since.

You can admire the astonishingly large variety of different designs by looking at the models in the showcases on the left side of the room, all on a scale of 1:20. There were barges for a wide variety of purposes: for passenger transport, salt transport, cattle transport, general cargo and much more.

In addition to the “Zillen”, there were also barges called “Plätten”. This boat type was also used for a wide variety of purposes, the main difference between the “Zille” and the “Plätte” was design wise: while the “Zille” tapered to a point at both ends, the “Plätte” had a sweeping stern.

“Plätten” also had rudders fore and aft. Although you can also see a centrally placed, classic stern rudder on some models, the “Plätte”, as well as the “Zille”, were controlled via the long rudder, the so-called "Danube trees", since the boats were hardly manoeuvrable downstream with the stern rudder, even when fully loaded.

At the next stop in the show case on the right side of the room you can see how remarkable the navigation upstream against the current was before the introduction of steam shipping.