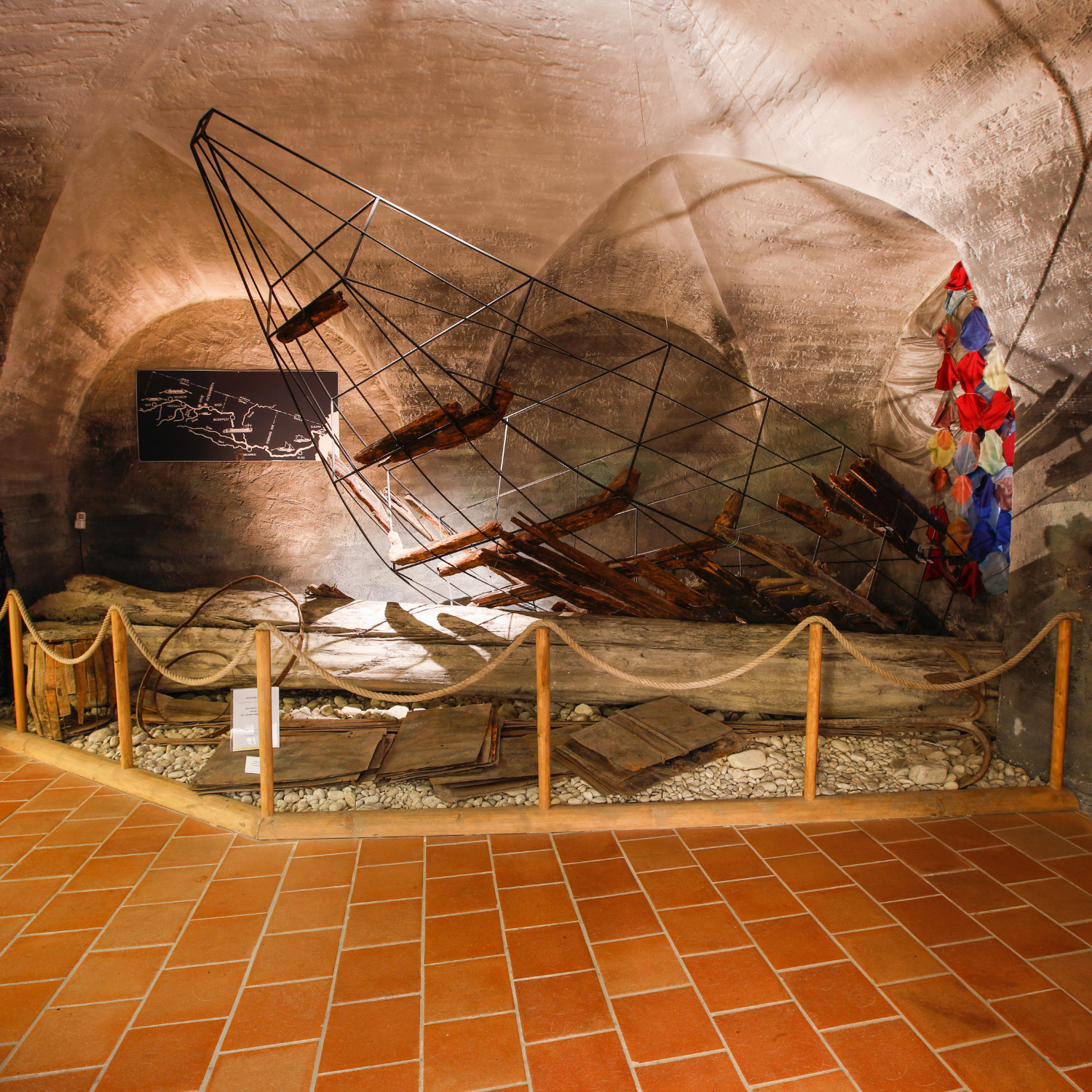 In 1975. during the construction of the Altenwörth power plant, almost 20 km east of Krems, the remains of a wooden transport boat were found. These sorts of transport boats are called “Zillen” and they have been used on the Danube for centuries. You can find out more about their various types and possible uses at the next stop of our tour.

The barge, the remains of which you can see here, was built in 1809 and sank as early as 1810. 200 years later we can only speculate about the reason, because some barges were not only poorly built at the time, but also often too heavily loaded.

Perhaps the cause was also a so-called "Rauner".

A “Rauner” is a tree trunk like the one you can see in the foreground. "Rauner" often lie buried in the sand and gravel of the Danube for several millennia under the exclusion of oxygen, petrify and can then be washed out by floods. When that happens, "Rauner" suddenly lie as an invisible danger in the supposedly safe fairway. Even today they still pose a threat to shipping. Just imagine the propellers of a ship colliding with such a trunk!

The fragments of the submerged “Zille” were recently dendrochronologically analysed for their exact age and the structure of the ship was recorded by computer photography. You can admire an exact model in the showcase.

The model clearly shows both the construction of a barge and the life of the boatmen on the Danube over 200 years ago: life and work on a boat did not take place in a luxurious environment, but at least you had a roof over your head. The boatmen’s profession was dangerous and usually did not bring in a lot of money, but it had relatively high social prestige.

In this case, the “Zille”, heavily loaded with iron products, is steered by two long rudders at the rear, the so-called “Danube trees”, and a small rudder at the front, to ensure that the boat remained manoeuvrable in the river despite its heavy load.

The remains are a wonderful document of how important the Danube was and is as a transport route. At that time, products from iron-producing companies were transported eastwards along the Alpine rivers and down the Danube.

Examples of these products can be found in the next room on the right in the showcase. The pieces are all originals from the Altenwörth ship discovery, including the iron nails. Note how the nails were transported in a barrel in a circle in order not only to accommodate as many nails as possible, but also to prevent the load from slipping inside the barrel.

You can also see sword and knife blades, various woodworking tools and even a vice at the bottom left in the showcase. The jew's harps, which you can see in the top right of the showcase, are particularly original.

In the next room you will not only learn a lot about the cargo on the “Altenwörther Zille” in the showcase on the right, but above all how diverse the types of ships used on the Danube and its tributaries were. And how cargoes were transported upstream before the introduction of steam shipping.