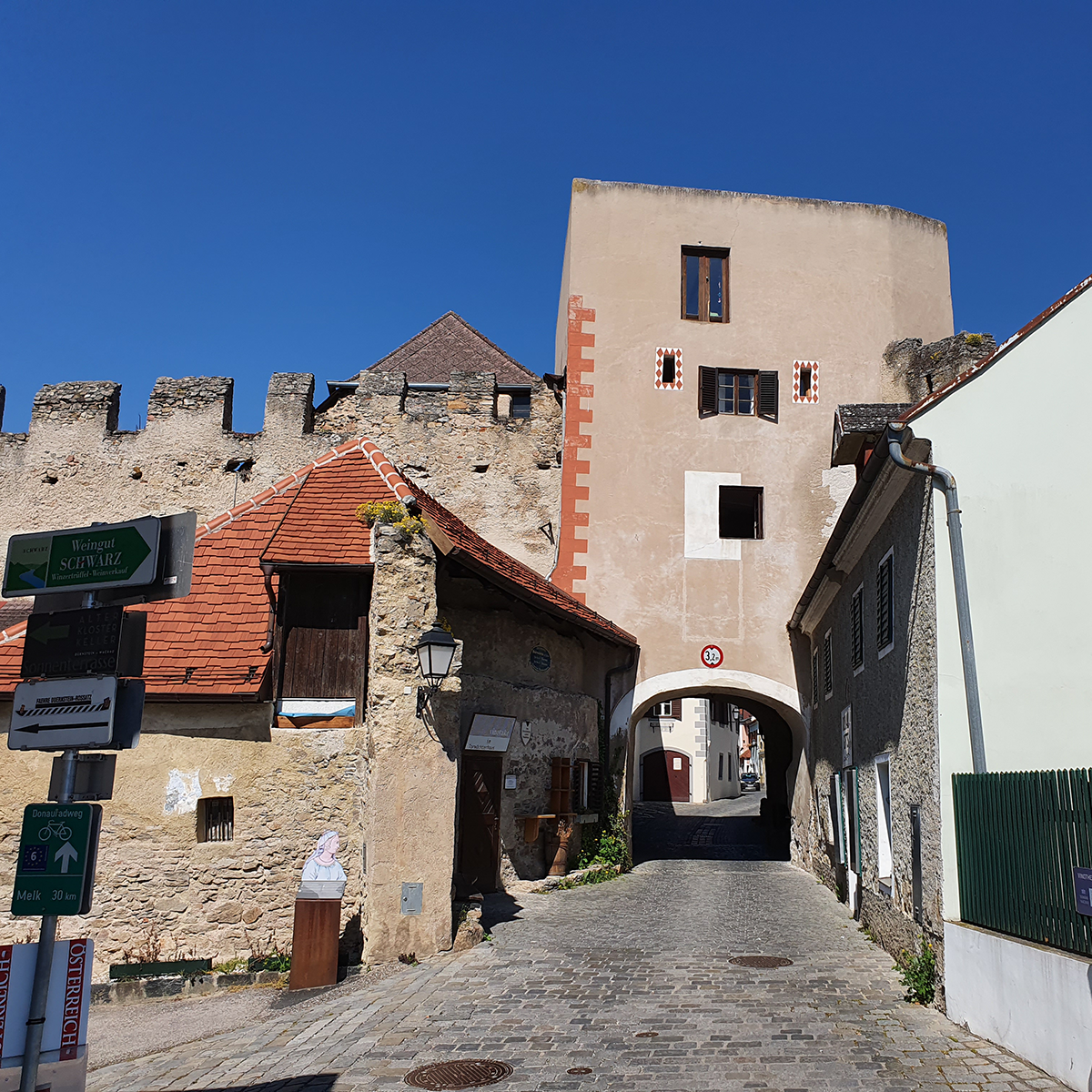 The Kremser Tor or Steiner Tor
Plus gatekeeper’s house

The Krems Gate, formerly known as the Stein Gate, is Dürnstein’s eastern gate and served in the Middle Ages as the main gate in the town fortifications.

The town of Dürnstein is a wedge at the foot of the 540-m-high castle rock. In medieval times, particularly the fortifications to the southeast of the town were upgraded, since an attack was most likely to occur from this side.

A high wall crowned with battlements and reinforced with bastions on its corners, plus a wide town moat were intended to deter foes. In those days, the Krems Gate was the only way in.

The Weißenkirchen Gate could once be found on the western side, the remains of which can still be found at number 43, having been almost entirely demolished during the laying of Wachaustraße. The northern side of the town on the mountain slope and the southern side on the Danube were, by contrast, easier to defend.

Dürnstein’s ability to put up a good fight is described by the popular legend ‘The Clever Dürnsteiners’. When Bavarian troops advanced east along the Danube in around 1740 during the War of the Austrian Succession, terror reigned over the town. Then the town fathers came up with an idea to save them. By blowing smoke through blackened well pipes and with the help of all residents out on the streets making a din, Dürnstein gave the impression of a having a strong garrison. Legend has it that the enemy was fooled and moved further downstream!

The Krems Gate has a multi-storey, square gate tower with a passage and slotted windows from the 15th century that was later converted into a dwelling. Next to the gate is the former gatekeeper’s house from the late Middle Ages, which originally stood between the main gate and an ante-gate which no longer exists.

Since medieval town gates were normally named after the nearest town, this gate should be called ‘Stein Gate’. Presumably though, the dominance of Krems and steady amalgamation of Krems, Stein and the villages between them has led to the more frequent usage of the name ‘Krems Gate’.

Because of the village of Und (meaning ‘and’ in German), there is an old joke locals tell one another: ‘How many places are Krems und/and Stein? Correct, 3!’

Since 2006 there has been a vinothèque within the Krems Gate, where you can taste and purchase wines from the winegrowers of Dürnstein and Loiben in an unhurried atmosphere. Homemade products using regional apricots can be found here too of course – like the wine, they make a precious souvenir from the Wachau region!