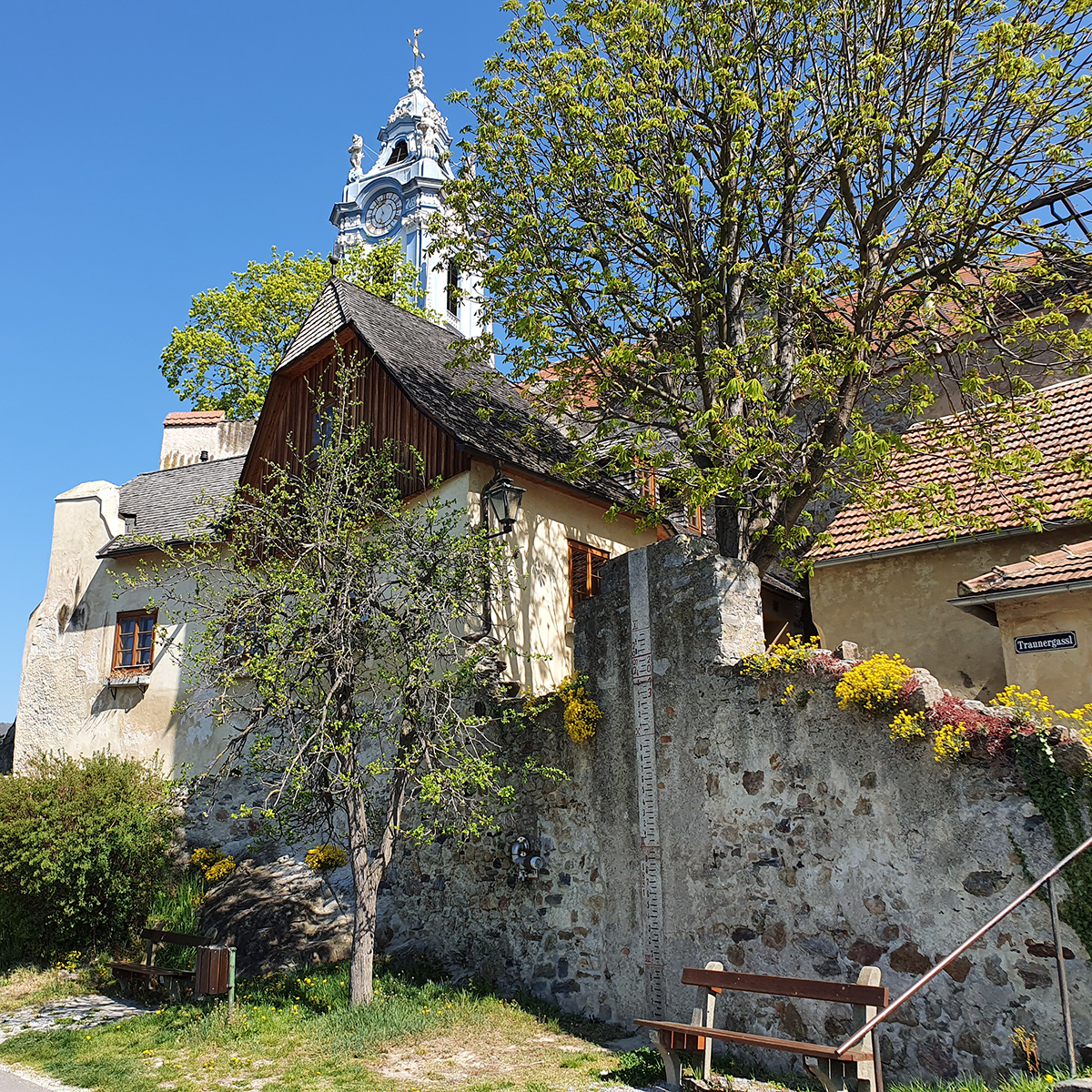 Donaupromenade and Malerwinkel
Places where you can unwind

‘Entwined by the silver ribbon of the Danube it rises to hills full of wine!’ This is how Austrian poet Franz Grillparzer once rhapsodised about the Wachau region on the banks of the Danube.

The mighty river runs 2,875 km through Europe from its source to its estuary in the Black Sea, with hectometre stones every hundred metres, neatly marked in black on a white background.

Dürnstein’s promenade runs along the old ‘Treppelweg’, the narrow path originally meant for the Danube boatmen. Before the introduction of motor shipping, fully loaded barges were pulled upstream by up to 60 draught horses. Since the animals had to change banks depending on the condition of the path, they were trained to jump onto the barges at the right moment in order to continue their work on the opposite side of the river.

At that time the Danube was still unregulated and working on the river and its banks was sometimes very dangerous. It is because of this that the statue of an angel, looking out onto the water from the terrace of Dürnstein Abbey, holds in his hands a glass heart.

In earlier times, a light is supposed to have been lit in this heart each night to warn passing ships of the ‘eagle rock’ protruding out of the water at Dürnstein.

Today’s Grüblgassl was once the entrance to the port. About 100 steps lead here from the Old Town to the Danube and promenade. Incidentally the way from the west to the Old Town is wheelchair accessible.

When the Wachau Bundesstraße was laid in the 20th century, construction of a road tunnel beneath the Old Town ensured the preservation of the Donaupromenade and access from the town. Without this pioneering achievement, Dürnstein’s world famous scenery would have disappeared behind a dam.

And possibly the famous ‘Malerwinkel’ or ‘painter’s view’ with it. The romantic Traunergassl takes you from the Old Town to the Donaupromenade where the Traunerhaus is located. The Traunerhaus was originally a kind of customs house and has been lovingly renovated.

Malerwinkel has this view with the blue steeple of Dürnstein Abbey in the background to thank for its name. It is probably one of the most popular subjects for painters in the entire Wachau region and is still a coveted photo motif today.