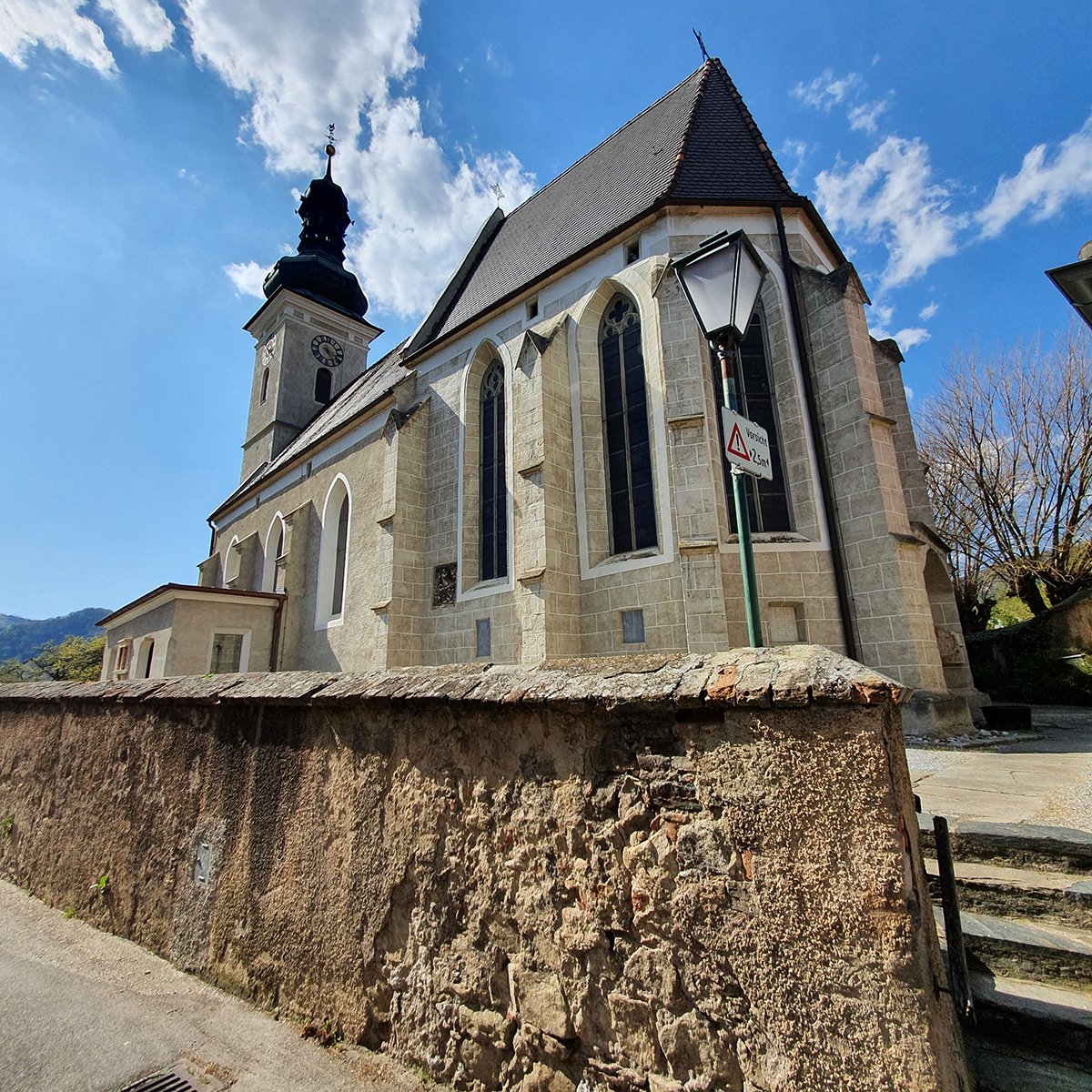 The parish church of St. Quirinus
A jewel that has grown over time

There is no exact written record of how Unterloiben’s parish church of St. Quirinus came into being. What is documented is a donation by Emperor Henry II to Tegernsee Abbey, whereby he bequeathed the area around Loiben to the Bavarian Benedictine monks in around 1000.

The new owners built a church which today, along with the medieval surrounding wall and its baroque portal, can be found in a somewhat elevated position by the western entrance to the town.

The church structure has been augmented over the centuries and consists of several parts. The long nave on the right dates back to the 14th century. Adjacent to this is a narrower, towering eastern chancel and to the west, a late Gothic steeple with a baroque onion dome, accessible from the outside.

The left nave of the parish church still has its original cross-ribbed vaulting; next to this is a chapel with star ribs and the gallery rising above it. On the outer wall are a number of epitaphs or mock tombs. Among them can be found a late medieval relief of the Agony in the Garden.

Since the Bavarian monks brought with them a statue of St. Quirinus and relics of blood and bones to Unterloiben, the church developed into a place of pilgrimage, which was encouraged by a Quirinus brotherhood from the 16th century on. In 1783 Emperor Joseph II suspended the brotherhood by decree, putting a stop to the pilgrimages.

Just one year previously, the painter Martin Johann Schmidt, better known as ‘Kremser Schmidt’, created the famous altarpiece ‘The Beheading of St. Quirinus’. On the chancel walls are further oil paintings with depictions of the Quirinus legend along with numerous folkloric details.

The neo-Gothic stained glass windows date from 1889 and show the Immaculate Heart of Mary, St. Rosalia and St. Quirinus as well as rich ornamental patterns. On the right side altar you can see Mary with baby Jesus and on the pulpit ’Jesus with the Samaritan Woman at Jacob’s Well’.

On the north side of the church is a mural commemorating the Battle of Loiben in 1805 between the Russian and Austrian allies and Napoleon’s French troops.

The painting depicts a body on fire. In the course of the battle, Russian soldiers set fire to several buildings in order to drive the French out of the houses. The people living in them wanted to extinguish the flames but were forbidden to do so. When the local school teacher refused to hand over the keys to the parish church, he was wrapped in a bundle of straw and set alight. The mural was created in memory of his agonising death.

Founded by the Benedictine monks, the parish church of St. Quirinus is now also looked after by the parish of Dürnstein. The parish community centre on the ground floor is the centre of many activities. The Quirinus choir of Loiben rehearse here, it is the meeting point for altar servers and friends catch up in the parish café.