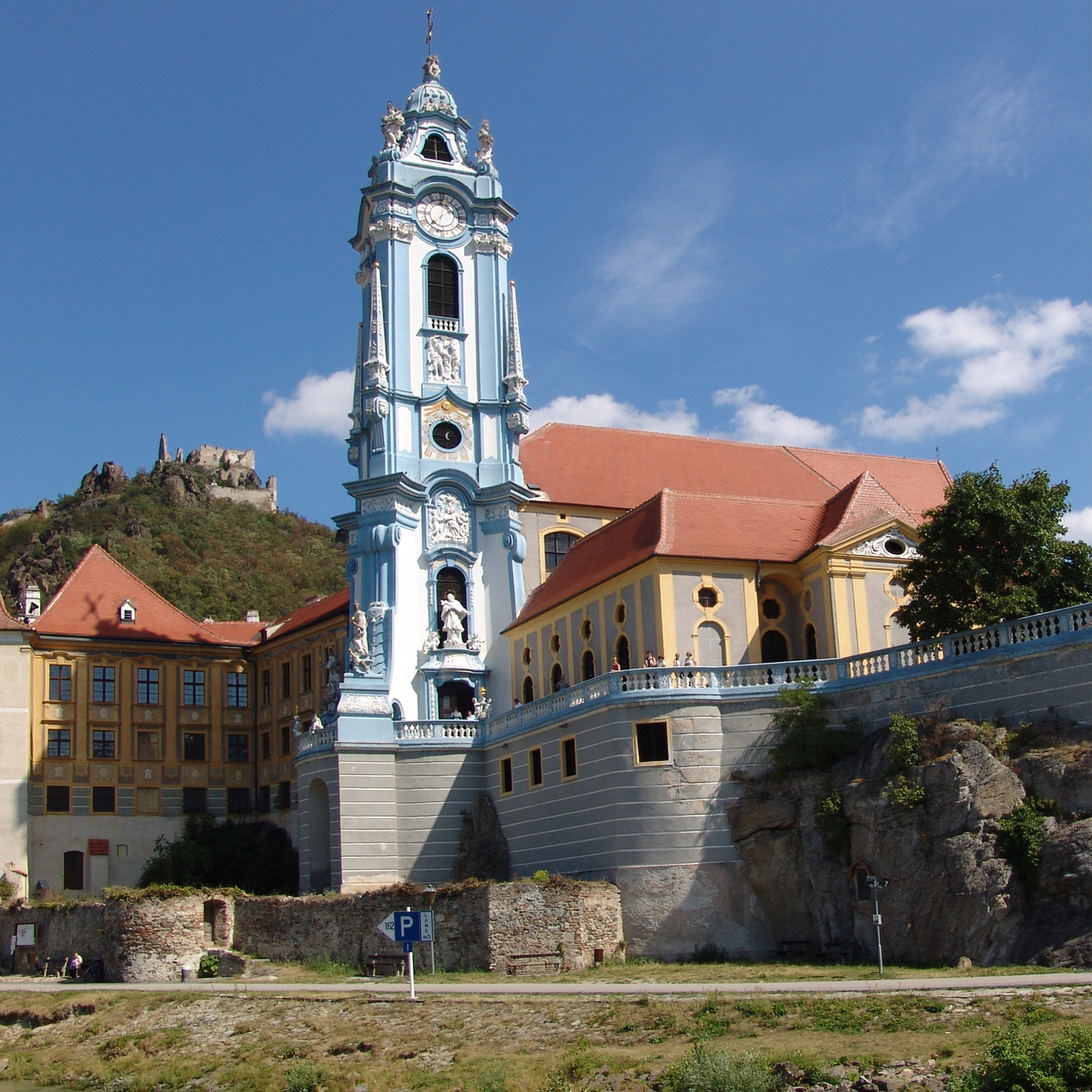 Dürnstein Abbey
From the Marian Chapel to the museums

The history of Dürnstein Abbey began in 1372 with the construction of the Marian chapel, donated by Elsbeth of Kuenring. Her descendant Otto von Maissau founded the abbey in 1410, bringing Augustinian canons to Dürnstein from Wittingau in Bohemia (now Czech Republic).

It was the Augustinian canons who, in the course of the 15th century, built the church, cloister and monastery. The basic Gothic structure changed very little over the next few centuries.

It was not until 1710, exactly 300 years after the abbey was founded, that the complex underwent a baroque renovation. It was the year Hieronymus Übelbacher was elected provost.

Übelbacher, a graduate doctor of theology and philosophy, would prove to be the driving force and mastermind behind the baroque redesigning of Dürnstein Abbey.

He hired Joseph Munggenast as head master builder, Jakob Prandtauer from St. Pölten for the entrance portal and abbey court and assigned Matthias Steinl from Vienna the church portal, church interior and lower floor of the tower.

Famous artists from the region were involved too. Johann Schmidt for instance, the father of renowned Austrian baroque painter Martin Johann Schmidt, was responsible for the sculptures. His son, better known as ‘Kremser Schmidt’, later contributed two altarpieces.

A unique piece within the abbey church is the freely rotatable tabernacle on the high altar in the form of a globe, decorated with 44 scenes from the life of Jesus. The organ is from 1724, has over 800 pipes and is still in pristine condition.

Under Provost Übelbacher’s leadership, Dürnstein Abbey not only acquired a uniform appearance in terms of structure and equipment but, in 1733, its famed blue and white steeple, which has become a recognised landmark of the Wachau region.

When Provost Hieronymus Übelbacher died in 1740, he left behind, aside from his architectural legacy, 14 heavily detailed calendars with appointments, journal notes, jokes and recipes in German and Latin. The texts are in the Herzogenburg monasterial archives and were first published in book form in 2013.

A few years later monastic life at Dürnstein Abbey came to an end. As part of reforms under Emperor Joseph II, Dürnstein Abbey was dissolved in 1788 and the building and parish handed over to Herzogenburg’s Augustinian monastery in whose possession it is today.

Today Dürnstein Abbey is an attractive place to visit and as of May 2019 invites you to enter its spiritual confines as part of its ongoing exhibition ‘Discovery of the Precious’. The museum is more of an excursion into the world of ideas about goodness, beauty and truth than a retelling of centuries of history.

Highlights of the tour include the oldest part of Dürnstein Abbey, the Gothic portico, the terrace with its wonderful view of the Wachau region and, of course, the abbey church.

In addition to the fascinating museum, Dürnstein Abbey is home to a primary school, rented apartments, event rooms and parish.