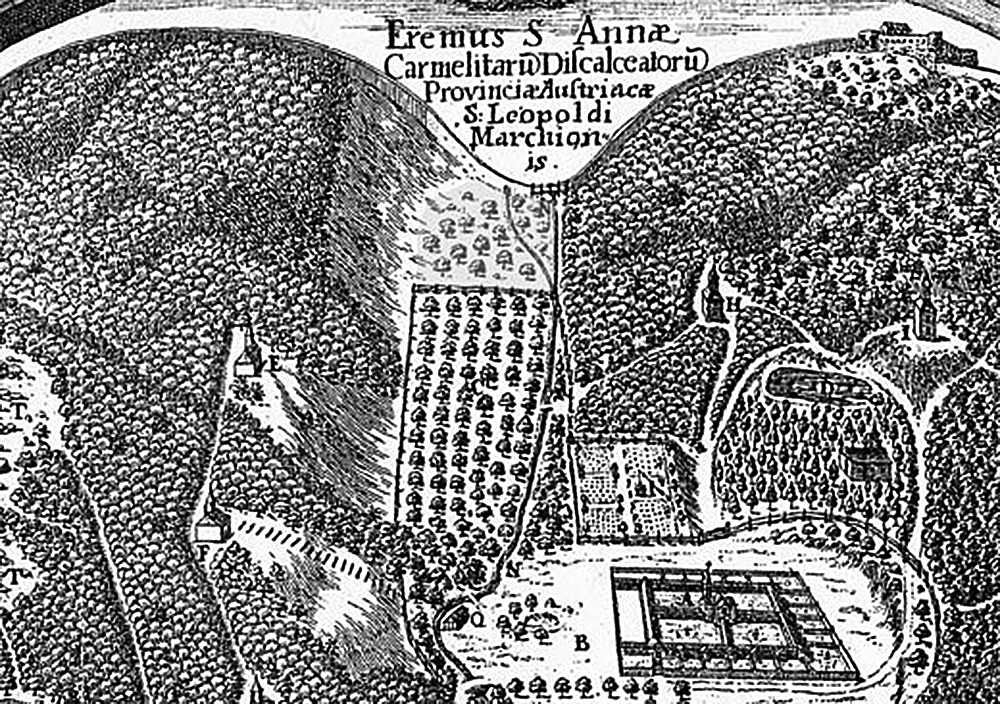 St. Anne’s Monastery in the Desert

The term “desert” comes from the ancient Greek word “eremos” meaning “uninhabited”. As does the term “hermit”, referring to someone living in isolation. So “Wüste” or “desert” is an inaccurate translation of the seclusion enjoyed by the former St. Anne’s monastery. What remains of it is now set in an idyllic nature park, one of the most beautiful areas in the Leitha mountains.

The Carmelite monastery was founded by Eleonora of Mantua, wife of Emperor Ferdinand II, in 1644.

An illustration from 1689 represents an exact record of the former monastery grounds. A 4.5-km-long wall in the shape of a heart, still visible today, surrounds the monastery enclosure. Next to the mighty archway of the main entrance are the Leopold Chapel and gatehouse. The Arbach flows through this idyll. There are 7 hermitages dotted around the woods within the monastery walls.

There is a fishpond, orchard and feudal estate, 3 stone bridges and a lime kiln. The grounds are accessible by an avenue of lime trees; in the centre are the monastery and church. There are 20 cells at the monks’ disposal, each consisting of a room and small garden. The guest rooms, conference rooms, refectory, kitchen, washroom and large atrium serve as communal spaces. The monastery flourishes in the time of Maria Theresa but the order is dissolved under reforms made by her son Emperor Joseph II.

Today a nature park centre, open on a regular basis, can be found in the renovated monastery, where numerous events, interesting workshops and tours take place.